Maasai Mara National Reserve is about 280 km from Nairobi, This journey to the park can be accessed by both air and by road. There are several airfields that were established in the Park to accommodate travelers who prefer taking flights to the Park. Airfields include: Mara Serena Airport, Ngerende Airport, Tembo, Ngerende, Kichwa, Keekorok, Angama Mara, and Musiara Airport

Which airport is preferable?

It all depends on which accommodation you booked for your stay in the Park, most Airports are close to different lodges which it is in your best interest to book a flight to an airport closest to your booked accommodation. A flight to Maasai Mara from Nairobi via Wilson Airport is only 1 hour which saves you the 4 to 5 hours you would have endured on the road.

The journey to Maasai Mara National Park both by air and road has disadvantages and advantages. Before running to a conclusion about which travel means you will take, kindly look through these factors that will help you to have a better choice.

If you have a lot of time to embark on your safari to Masai Mara, road access would do you no harm, a matter of fact it’s the best option you can have, the option gives you an opportunity to enjoy the country scenic views along the drive to include suburbs of Nairobi, the great rift valley escarpments which is a major en route stopover. The drive is also a cheaper option compared to booking a flight to the Park

However, along the drive, initially, you would have to encounter bumpy roads as you approach closer to the Maasai Mara National Reserve. The last 80 km could go for about 3 hours on the road which reflects just how much of a delay the bumpy roads would bring about. The good news is that the 80km section of the road to the park was tarmacked therefore it is a seamless tarmacked road drive from Nairobi to the Park now with about 4 to 5 hours of travel time compared to the initial 6 hours.

This is ideally the best option for travelers having a short time to spend on a safari to Masai Mara National Reserve. (Less than 2nights). Flights to the Maasai Mara depart from Jomo Kenyatta airport which is about 1 hour from Nairobi with consideration of Traffic jam. The 3 companies licensed to operate flights to the Masai Mara include Air Kenya, Safari Link, and Fly Safari. At Masai Mara Holidays, we organize Fly-in Safaris to Maasai Mara, simply contact us to plan a customizable safari with help of a professional team.

Flying to Maasai Mara offers you an amazing opportunity to view beautiful aerial views of the Park. The aircraft really fly low which offers you a chance to Enjoy aerial scenic views of the savannah grasslands blended with spotted shrubs and the major highlights, the Mara river as it makes its way through the Park. There are also arranged flights from Tanzania at Mombasa and Malindi together with Zanzibar all going to Masai Mara. 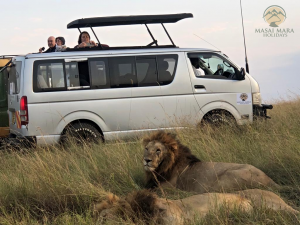