Masaai tribe consists of an indigenous group of people living mainly in Kenya and northern Tanzania. The Maasai migrated from the Sudanese Nile to the Kenya–Tanzania border area in the 18th century. A reputation as fearsome warriors ensured that the Maasai were avoided by the slave caravans and European explorers who penetrated the interior in the 19th century. European settlement brought disaster in the form of a rinderpest epidemic that killed most of the Maasai’s cattle and caused large tracts of their territory to be made into game reserves and settler farms. 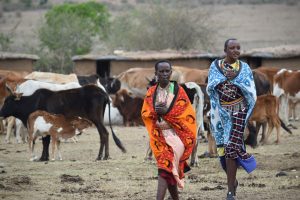 The central unit of Maasai society is the age set, which changes every 15 years or so following the initiation of a new generation of ilmoran (warriors). The Masaai are also called semi-nomadic because they move around from time to time.

Social interaction between neighboring Maasai families and distant relations is integral to Maasai culture since their communities like those of other pastoralists tend to be more dispersed than their agricultural cousins. During key events such as Eunoto, families belonging to the same clan will travel long distances to be present at the initiation of an ilmoran, carrying a range of gifts for the celebrations.

Family wealth in Maasai Communities is measured in terms of children and cattle, a herd of 50 cattle is respectable, the more offspring the better, and a Maasai man with plenty of one but not the other is considered poor. This means that even inherently wealthy Maasai families live on the poverty line – most have several children and converting a household’s cattle to cash would demean its standing.

Maasai warriors are easily recognizable, with their toga-like red shuka, ochre hair styled in a manner that has been compared to a Roman helmet, earlobes cut away from the main part of the ear, and trademark wooden poles or spears. 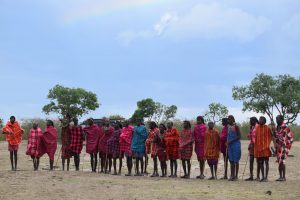 In the olden days for a male to be considered a man he would have to kill a lion alone all by himself with a spear, it was a sign of bravery and personal achievement. The boy would then be considered a warrior, the lion’s skin is then made into a hat which he will have to wear as a sign to show his manhood. Unfortunately, this practice is no longer legal anymore due to wildlife preservation.

For food and protecting their communities from outside, the Maasai people normally fence their religions to prevent wild animals from coming in. Duties of the wives is mainly to cook take care of the children, and husband, the Men also have the task to build the houses. Every teenage Maasai boy must undergo initiation by circumcision before being accepted as an ilmoran. This ritual is performed without an anesthetic. Should the initiate cry out, his post-circumcision ceremony is canceled and he will be rejected by his peers for several years before being forgiven.

Maasai men can have several wives, this is another fact, they are polygamous. You may probably be wondering why Maasai men have to take up more than one wife, this is because in their culture the size of a man’s family in the number of children had status and importance to him. 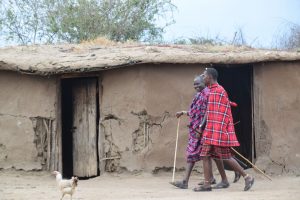 The more children they have, the more respectable they are. Dowry is also a  key aspect of Maasai Marriages. How do they measure this? Well, this typically revolves around the number of livestock which is cows, sheep, and goats that the man has. The more livestock you have, the wealthier you are perceived

The Adamu is also a ritual whereby the male Maasai will compete against each other to win the heart of potential brides, the one who jumps the highest is perceived as the most masculine, and the lesser dowry they have to pick when they’ll be getting married. Talking of dowry, this is our next fact about the Maasai people.

The Maasai customarily live in family compounds known as manyattas. A single manyatta will normally be inhabited by a nuclear family, which can amount to many dozens of people. As Maasai society is polygamous, an elder can take as many wives as he can afford and father as many children as possible. Conventionally, a Maasai man of the active ilmoran (warrior) age-set is forbidden from marrying or from starting his own manyatta until the next ilmoran generation is initiated, when he and his peers – typically in their early to mid-30s – become junior elders, the group responsible for political and legislative decisions. Women, by contrast, are usually married off in their teenage years, leading to a large age discrepancy between a man and his wives. 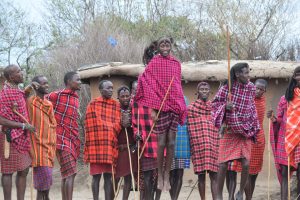 The manyatta typically consists of a protective outer fence made of spiked branches or euphorbia trees. Within this lies an outer circle of huts, one of which is reserved for the man of the family and one apiece for each of his wives and their younger offspring. The stock pens form the inner circle, affording maximum protection to the precious cattle and goats.

Traditional Maasai huts, with some regional variations, are typically made by first creating a frame of strong sticks. The huts are then plastered with smooth mud or mud mixed with grass. The low flat ceilings are usually made with thatch, although these too may be regularly strengthened with the mud mixture. While on safari to Maasai Village, you will have a chance to experience how it is inside the Masai huts feels like, just judging by the way the house itself is very small, the kitchen is usually in the middle of two sleeping spots.

Making fire is part of the immense bushcraft of the Maasai. Rural manyattas still depend less on shop-bought gadgets than on traditional techniques such as the impressive feat of starting a fire simply by rubbing two sticks together furiously until they spark. Cooking is done by the Maasai women in a chimney-free hut that is easily recognized by its smoky smell. The classic Maasai diet is strongly centered on protein derived from cows and other livestock and is usually supplemented by ugali (maize porridge) and other local staples. The Maasai people eat only two times a day; once in the morning and once at night, which should probably be the reason why they are so slim. Beef is seldom eaten by the Maasai, as a living cow is more valuable to them than a dead one. However, a cow will be slaughtered, grilled and eaten – with immense relish – on special occasions.

Cattle are milked usually by the women, either in the early morning before the cattle are taken out to graze for the day or in the late afternoon after they are brought back. Milk and cattle blood form an important part of the Maasai diet, but it is regarded as insulting to the cattle to consume milk and meat the living and the dead – on the same day.

Bleeding the cattle is a tradition practiced by the Maasai. Blood drained painlessly and harmlessly from a nick in the cow’s jugular vein, is mixed with milk, and fermented in a calabash for several days before being drunk. This is the main diet of the Maasai who feed almost exclusively off their cattle, shunning wildlife, vegetable matter, or fish.

The skillful beadwork tells the end of your visit where you are transferred to the Maasai market, here you will be exposed to Maasai handicrafts. It is hard for you to miss that colorful and very elaborate hand works done by the Maasai women, it’s part of their duty to learn beadwork and these are worn both by women and men for various occasions. The beadwork tradition dates back hundreds of years

Also known as the African blanket, A Shuka is a red robe worn by Maasai men for protecting the Maasai from harsh weather conditions as its strong thick, and durable. Their Slipper-like shoes are made of leather, or sometimes rubber from old car tyres. The Maasai warriors are easily recognizable, with their toga-like red shuka, ochre hair styled in a manner that has been compared to a Roman helmet, earlobes cut away from the main part of the ear, and trademark wooden poles or spears.

On a visit to the Maasai Village, you will be welcomed with a song to express happiness the Maasai people have for visitors, this song is accompanied by a welcome dance which is otherwise a way for them to say that’s your home. Unfortunately, the villages have no musical instruments you will only hear gross chance and see movements in different directions. The happy village always invites you to join in the happy dance this was pretty fun and an alternative if you missed your cardio

The Maasai population is around 900,000 people and they live around the game reserves.  They are also rich in terms of land, the Masai Mara Game Reserve belongs to them and they owned a lot of the land around that area as well. If you’re looking for the best-valued packages  check out our professionally tailor-made Safaris to Masai Mara and request a free quote which will be attended to by our experts with immediate effect