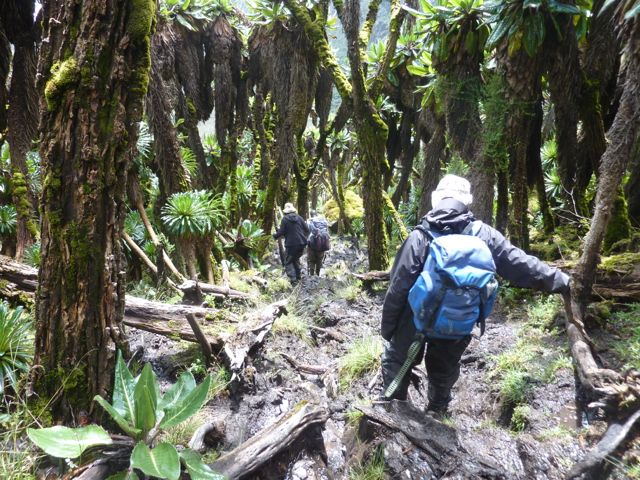 Rwenzori mountains range is most known especially for its extraordinary flora and the different vegetation zones. The vegetation zones are as follows: mountain forest zone (1500 – 2500 m); the bamboo zone (2500 – 3000 m); the heather and rapenea zone (3000 – 4000 m), which is characterized by the giant heathers Erica, but also giant lobelias and Senecio; the Alpine Zone (4000 – 4.500 m) with everlasting flowers or Helichrysum. The lower peaks are blanketed in moorland, bamboo, and rich, moist montane forest. Huge tree-heathers and colorful mosses are draped across the mountainside with giant lobelias and “everlasting flowers,” creating an enchanting, fairy-tale scene.

The landscape in the area swiftly shifts from thick bamboo, heather zone into the afro-alpine. These landscapes act as hosts to a shrieking 217 species of birds and 17 endemics. At about 1800 meters of height, the variety of birdlife will leave you captivated with sights at the Rwenzori Turaco, Handsome Francolin, White-starred Robin among the others. 70 species of mammals are also part of the exploring list as well as some of the world’s rarest vegetation.

Trekking/ Hiking is possible any day of the year however the months of June, July and August then late December, January February are the driest and best months to trek although some say the wet seasons are the best as the mountains are often covered in snowmaking specular scenery.

This short 3-day Rwenzori mountain trek follows an easy circuit route, which takes you through the rainforest and bamboo zones at the foot of the mountains, to the giant heather and heath of the Alpine zone. The trek exposes you to the art of nature which involves rare vegetation, to various streams, rivers, and falls. With every hour and every altitude gain, the landscapes, colors, and critters are ever-changing. As you go higher, the trek rewards you with clear and fantastic views of Queen Elizabeth National Park as well as Lake George across the foothills.

Day 1
Arrive at Trekkers Hostel (Kilembe) in morning and meet with your climb guide and the rest of the team for briefing and also conduct a thorough kit check.

As you leave the ranger’s post you walk along a path through tall grassland and giant ferns which give way to the beautiful rainforest. As this is a new route the forest is largely untouched and carries a wide variety of trees and plants. Many species of bird can also be heard and seen in this rich environment, as can Chimpanzees and Colobus monkeys. Upon entering the forest, the first few kilometers of the trail climb steadily, crossing several small streams and rivers. At a height of 2,596, you reach a sine hut where the atmosphere is decorated with wooden huts that are set between forest tall trees on a narrow ridge. While here, you have the opportunity to enjoy the beauty of the forest as well as the tenacity of waterfalls crashing over the rocks. Enock’s falls, which are just within the proximity at this point also offer spectacular views that many wish to forever. The churning action of the waters falling creates an everlasting impression.

From Sine camp, the trail becomes gradually steeper as you enter the bamboo zone. You will witness a series of rare vegetation as well as various species of birds like the Rwenzori turaco which has bright red or crimson wings. At about 3,000 meters altitude, you reach the Heather zone where the Gaint Heather trees reach 15 meters in height. The trail becomes gradually steeper as you enter the bamboo zone and ascend a high ridge, at the top of which is Samalira Camp, where you will rest for the night. As you near the top of the ridge, you break out of the bamboo to fantastic views of the valleys and hills below looking across to Lake George and Queen Elizabeth National Park in the distance. The equator lies just north of Lake George. Samalira Camp is situated amidst giant heathers, with amazing views over the lowlands below.

Day 2
After a hearty breakfast commence walking. The trail becomes steeper as you enter the bamboo zone. During the rainy season this section of the trail can also become exceptionally muddy.

As you near the top of the ridge and exit the bamboo zone you will be greeted by fantastic views of the valleys and hills below. On a clear day, the view extends all the way across to Lake George and Queen Elizabeth National Park. As you continue to hike, the bamboo forest will gradually give way to forests of giant tree heather and lobelias of a kind that can only be found in the Rwenzori Mountains. After 6.9km as you near the top of the ridge, you will approach Kalalama Camp (3,153m), where you rest tonight. Kalalama camp has fantastic views of the valleys.

From here, you pass through mossy ridges to more heather forests, after which you will encounter flat valleys that are punctuated by many lobelia plants. From here you climb a short distance to Kyravilla and descend down a stunning moss-covered ridge back to Samalira Camp nestled in a small dip in the landscape but with fantastic views.

Day 3
After breakfast at Kalalama Camp, we shall descend through the bamboo forest, back into the Afro montane zone and down the ridge to the Rangers Post, arriving early afternoon. It is a short walk down to the Trekkers Hostel, where your trek ends.