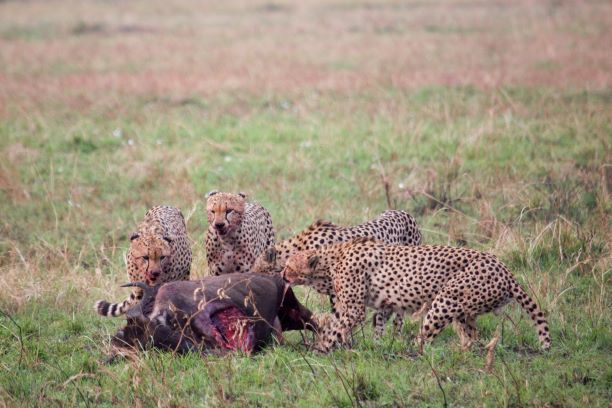 Serengeti safari takes you to Africa’s best and Tanzania’s Most Famous National Park; an undulating and almost treeless endless plain dotted with kopjes that is traversed by tens of thousands of hoofed animal herds which constantly move in search of fresh grassland. Serengeti National Park trips feature wildlife drives that always impress you with vastness, should you stay longer, every corner of the park equally offers the same abundance in wildlife. Serengeti National Park covers an area of about 14,763 sq. km and is a continuation of the Masai Mara National Reserve in Kenya

Visiting Serengeti National Park safari, expect to see the most famous residents which are the wildebeests. These herd animals are over one million in number and their annual migration is biggest highlight of a Serengeti safari tour. In addition to the wildebeests, Serengeti National Park Safari also encompasses various lion prides, cheetahs, zebras (about 200,000) and giraffes. You are also likely to to witness Thomson’s and Grants gazelles, elands, impalas, klipspringers, warthogs and the various bird species. Most of all the shorter Serengeti Safari Tours explore the Seronera base although other sectors are equally rewarding. In the low season you will witness few vehicles outside Seronera. This region (central) and southern parts of the Serengeti are most visited and are readily accessed from both Arusha and Mwanza via the western corridor. Southeast near the Ngorongoro Conservation Area and Lake Ndutu is the prime base for wildlife viewing during the December and April wet season when it’s full of the retiring wildebeest.

The Serengeti Wildebeest migration takes place in the rainy season between December and May. Most of the wildebeests are spread over the southern section of Serengeti National Park and Ngorongoro Conservation Area. As these areas have very few rivers and streams they dry up quickly when the rains cease. The wildebeest concentrate on the few remaining green areas forming the gathered herds that later migrate both north and west in search of food to begin the great wildebeest migration in Serengeti National Park. From about July to October, the herds are on vacation in Masai Mara National Reserve before they start their return journey back to Serengeti National Park in anticipation of the rains. One of the major highlight stages of the migration takes place around February, when over 8000 wildebeest calves are born per day, although 40% of these will dies before reaching 4 months old. This stage of the migration is known as the calving season and it is known to draw various travelers across the globe that embark on Serengeti safari tour at this time of the year. Serengeti National Park Trips offer unmatched safari opportunities and the beauty and synchrony of nature can be appreciated here as in a few places. At Masai Mara a Holidays we always advice travelers that are able to visit Serengeti National Park Safari, that it’s not a chance to be missed. Also try to set aside as much time as possible for your Tanzania safari Serengeti to explore the parks varied zones.

Best time of the year for Serengeti Safari

The best time of the year to go on a Serengeti safari tour is between December to June. Around this time of the year, the park registers the highest concentration of wildlife although the Serengeti can be visited rewardingly at any time of the year. Should your interest be the Serengeti wildebeest migration safari; the best base from about December to April is around Seronera or in the southwestern part of the park. The thrilling river crossing along Grumeti River, which happens in the western corridor usually takes place sometime in May and July although it’s hard focusing your Serengeti tour on this event as the viewing window can be so short. It has also been noted over the years especially in the dry years that the migratory herds tend to move northwards sooner avoiding the western corridor. The northern Serengeti around Lobo and Klein’s gates is also a good base during the dry season, particularly between August and October.

The main activity is finding animals which are done on morning and evening game drives within the Park. Game drives in Serengeti are known to be preferably witnessed in either a 4×4 open roof or open-sided safari land cruiser or an open roof 4×4 safari van, both options offer you 360-degree views. The best time is noted to be between December and April and this season comes with the highest concentration of wildlife in the park.

Short walks on your Serengeti National Park Safari will last from 2 to 3 hours outside the park and the Maasai cultural activities can be arranged along the park border areas or within the central Serengeti regions.